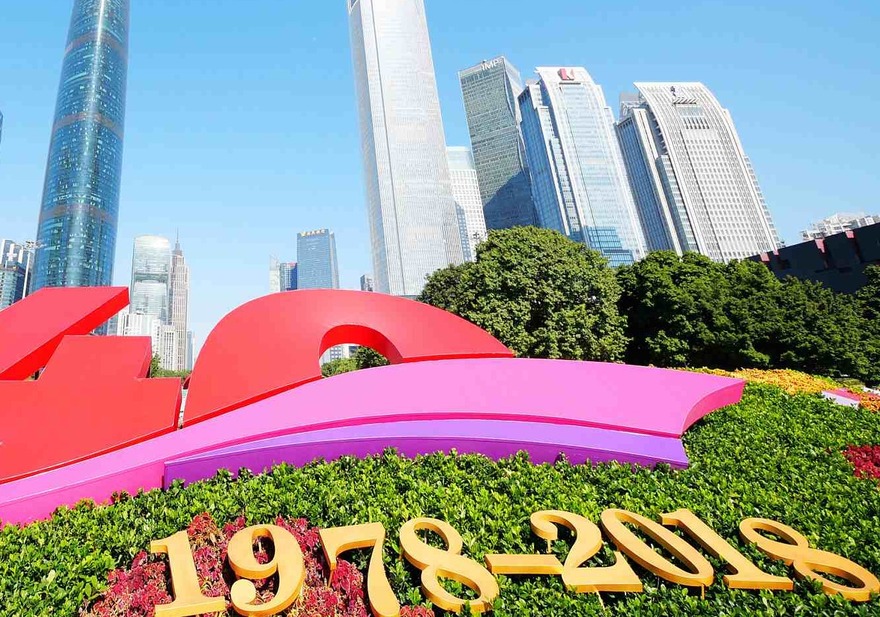 Editor's note: Wang Shanshan is a current affairs commentator and former Washington bureau chief of China Radio International (CRI), with 10 years of research on China-U.S. relations. The article reflects the author's opinion, and not necessarily the views of CGTN.

Long lines of people have been willing to brave Beijing's bitter winter cold to see the exhibition on China's achievements over the past 40 years of its reform and opening-up drive. One-and-a-half million visitors came to the exhibition on one day.

And it's no wonder, as almost every visitor could find something on display that they could relate to, be it a food ration card that reminded them of their struggle to make ends meet, or a sewing machine they could show to their kids and explain how invaluable it was for a family. The visitors marvel at how their lives have been utterly transformed within their lifetime, as China grew from a poverty-stricken country into the world's second-largest economy.

The transformation started on December 18, 1978, when the Third Plenary Session of the 11th Communist Party of China (CPC) Central Committee was convened. Forty years later to the day, a gathering was held at the Great Hall of the People to celebrate the event, which changed China's destiny and would greatly influence the world.

Addressing the gathering, China's President Xi Jinping made clear that reform and opening-up is one of the three major landmarks in China's modern history, alongside the establishment of the CPC and the founding of the People's Republic of China in 1949. China has taken the opportunity of the anniversary to reflect on what it has done right, and what it will do to ensure the country's future success.

The road to change started with efforts to correct the mistakes made during the Cultural Revolution, which had brought the national economy to the brink of collapse. “Poverty is not socialism,” said Deng Xiaoping, and “We must keep abreast of the times; that is the purpose of our reform.”

Propelled by a yearning for change, the country moved forward with a combination of incremental self-improvement and bold experiments to free up productivity, nurture businesses, and upgrade the social welfare benefits available to the people.

And as time progressed, the successes of reform have accumulated. So it's perhaps not a surprise that in a recent survey by The Economist of people in 50 countries, 91.4 percent of the respondents in China were optimistic about their future, and believed that their lives would be even better in 10 years' time. The success of the past 40 years has given the Chinese people confidence in their ability to face challenges and find ways around obstacles.

There have been times when Western political and economic theories were all the rage. But Chinese people have learned through bitter experience that simply copying Western recipes for development doesn't work. This is why China formulated a recipe of its own that is rooted in its history and culture and based on its actual conditions.

One of the fundamental things that helped guarantee China's sustainable growth in a time full of uncertainties was a strong belief in the importance of having a long-term and systemic approach. As President Xi said, “Adherence to a system is a matter of fundamental, overall, and long-term importance that affects the development of the Party and the country.”

And an important part of that system is having strong leadership that provides consistency and predictability. These two traits are increasingly rare in a world where many countries only plan short-term policies that are little more than Band-Aids.

A second fundamental factor that has injected impetus into China's push for growth is a strong belief in the importance of culture. The "doctrine of the mean," an idea first advanced by the philosopher Confucius, is deeply ingrained in Chinese thought even today. At its most fundamental level, it is an understanding that carrying an idea to excess, even if it is one that can do good, is as bad as not taking it far enough to make it effective.

By embracing this belief, Chinese national culture nurtures creativity and experimentation without running the risk of an overdose on either conservatism or liberalism. Deng Xiaoping perhaps put it best when, speaking about the interplay between ideology and economics, he said, “It doesn't matter whether a cat is black or white, as long as it catches mice.”

And lastly, China would not have benefited from reform at home if it had not opened up to the world. This is why China's government dedicated time in the anniversary celebrations to remember and recognize the contributions of 10 international friends who were generous in the support they gave to the country's development. They include the Japanese entrepreneur Konosuke Matsushita, who was one of the first major overseas industrialists to recognize China's potential as an economic powerhouse.

Lee Kuan Yew, the man who led the transition of Singapore from the third world into the first in a single generation, was recognized for his role in pushing for Singapore's “deep engagement” in China's reform and opening-up. And Juan Antonio Samaranch, the former chairman of the International Olympic Committee, was warmly remembered by the people of China for helping to bring the world's most global sporting event to Beijing in 2008.

China's success was achieved through hard work, and thistles and thorns line the road ahead. The Chinese people are sober-minded that nurturing their growing aspirations for a better life and the rejuvenation of their nation will continue to pose challenges. But if the past 40 years has taught the world anything, it's that China is ready, willing, and able to face the road ahead.